Sustainable Growth Rate Repeal: What it Means for SNFs 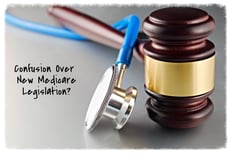 On March 26, 2015, the House of Representatives passed legislation to fix the Medicare physician payment problem and to extend the Medicare therapy cap exceptions.  The Medicare Access and CHIP Reauthorization Act (H.R. 2) repeals the Sustainable Growth Rate (SGR) formula and significantly changes payment under Medicare Part B to pay for value over volume. Within this bill the House included a two-year extension of the therapy cap exceptions process.

The Senate is expected to take up consideration of the bill immediately upon its return from recess on April 13th.  As you may know, the current extensions to both SGR and the therapy cap exceptions process have expired as of March 31st . With Congress away on Easter/Passover recess, the Centers for Medicare and Medicaid Services (CMS) and their contractors have begun issuing guidance on holding claims in preparation until the legislation is passed and goes to the President. Specifically, CMS has indicated that it will be able to “hold” claims and payments for up to two weeks, until April 14, allowing the Senate a short window of time to pass a bill that would affect payments and therapy services retroactively.

Unless a new SGR or “Doc Fix Bill” is enacted, the industry would see a 21.2 percent reduction to the Medicare Part B fee schedule effective April 1, 2015.  If the bill is enacted by the Senate upon return, this will not come to fruition and the industry will see a 0.0 percent adjustment from April 1, 2015 – June 30, 2015.

In order to mitigate risk, Harmony (HHI) supports the American Healthcare Association's (AHCA) recommendation that SNF operators hold any of their Medicare Part B claims with dates of service on or after April 1, 2015 until the Senate has made it clear what will occur.  As SNF providers typically bill on a monthly basis, those claims for the beginning of April will not be processed until early May which should be sufficient time to identify which path legislation has chosen.

The second area involved in this bill is the therapy cap exception process.  Technically this process has ceased as of March 31, 2015.  This indicates that there is a hard $1,940 therapy cap with no chance for exception.  Until Congress acts on this bill, any therapy services provided above this threshold could pose payment liability risks.

Harmony (HHI) also supports an additional AHCA recommendation to provide an ABN to any patient requiring skilled therapy services beyond the $1,940 therapy cap as of April 1, 2015.  This will assist the provider and beneficiary in liability protections depending on the resolution of the current SGR delay in the Senate.

Harmony (HHI) recommends that facilities track those ABNs provided to patients at the cap to ensure the facility communicates to the patient and family any/all regulation changes based on this bill and the Senate’s decision.

If you have questions regarding updates to Medicare Part B services, please click here to contact Harmony Healthcare International or call us at (800) 530-4413.