Kris is a nationally recognized keynote speaker with more than 24 years of experience in the Health Care industry with a specialty in the Post-Acute Care Arena. An Occupational Therapist degree from Tufts University followed by a Master’s in Business Administration from Salem State University coupled with a Nursing Home Administrator’s License, affords Kris an in-depth perspective into the clinical, financial, and operational components critical for business success.

Kris and her team of HealthCARE Specialists are integral players in Payment Reform with significant contributions to the policy process. The inordinate amount of regulatory change is nearly impossible to digest and implement in the required timeframes. This changing regulatory climate was a driving force in Harmony Healthcare International’s (HHI) mission to distill, synthesize and educate owners and caregivers which in turn facilitates high quality outcomes and optimal care.

The Honorable Mark Parkinson is the president and chief executive officer of the American Health Care Association (AHCA) and National Center for Assisted Living (NCAL), which represents more than 12,000 for- and not-for-profit nursing homes, assisted living residences, and centers for the care of people with intellectual and developmental disabilities. Before leading AHCA/NCAL, the native Kansan was a successful businessman, state legislator, and most recently served as the 45th Governor of the State of Kansas.

As President, Billie Nutter is responsible for bringing Casamba’s mission, vision, and values to life. An established leader in the post-acute healthcare space, Billie’s experience in establishing and directing efficient and effective health care organizations accentuates her guidance of the company’s operational teams.

Prior to joining Casamba in 2017, Billie served in various executive roles, including as President and CEO of Brighton Therapy and Rehabilitation and Senior Vice President of Operations in the Skilled Nursing Division for Avalon Health Care Group. She earned a Master of Science in Communication Disorders degree from Western Kentucky University along with a Bachelor of Health Science in Communication Disorders and Bachelor of Science in Education and Biology degrees from the University of Louisville. A licensed Speech Pathologist, Billie is also a member of the American Speech – Hearing Association.

“On August 21, 2011, I was burned alive. I was a passenger in a vehicle that lost control and struck a tree. The car was described as exploding on impact. Trapped inside this firey wreck for an hour, I was going to die there. When rescuers eventually were able, they needed four jaws of life to free me and the other passenger from the car. I was put in an ambulance and rushed to Brigham and Women’s Hospital. I flat-lined on the way there. I flatlined twice more that weekend. I suffered 3rd and 4th degree burns up and down my legs and across my left hand, all so significant that they would all requiring some form of amputation. I was burned, alive. I was entered into the Intensive Care Burn Unit for two months where I underwent two surgeries a week for two months straight. Yes, two surgeries a week for two months. As my condition improved, I was transferred to Spaulding Rehabilitation Hospital. There, I worked harder than I have in my whole life. Mentally, physically, emotionally and spiritually. It was my underlying strength, hope, willpower and positivity that would lead me to where I stand today.

Before I left, I talked with my surgeon who had seen me on the night I came in at my very worst. He told me that because of the severity of the burns and the grafts to my residual limbs, it would be about a year and a half before I would be able to even use prosthetics or try to walk again. Five months later, we had a meeting.

My mission in life is to see through the flames and overcome their challenges; mentally and physically. As an athlete amputee supporting other amputees, burn survivors, and those with post-accident distress and depression I conduct community outreach, small workshops, and work as an inspirational speaker focusing on the themes of positivity, underlying strength, willpower, perseverance, and self-motivation.

David Glickman works with healthcare organizations that want to add a combination of valuable content and comic relief to their events in order to make them really fun and memorable.
David has been a professional speaker and entertainer for over twenty years and has presented over 2000 programs. Before transitioning from “show business” to “speech business,” he worked with everyone from The Beach Boys to Steve Martin and appeared on “Evening At The Improv” and several other national television shows.

In the late 1990’s, David moved full-time into professional speaking. He specializes in customized workplace humor and is able to “find what’s funny” in the many healthcare
organizations to whom he has spoken.

In 2011, David received the Certified Speaking Professional designation. This is the highest earned designation awarded by the National Speakers Association, achieved by less than
10% of professional speakers.

In 2016, David was awarded the Council of Peers Award for Excellence (CPAE) and inducted into the Speaker Hall of Fame. This is a lifetime award for speaking excellence and professionalism.

David is also the author of Speaking of Funny: 77 Ways to Add Humor to Any Presentation.

Diane Shader Smith has been a writer, speaker and publicist for more than 25 years. Her books include Mallory’s 65 Roses, Stevie’s Secret, A Test of Will, Undressing Infidelity: Why More Wives are Unfaithful, and an anthology of writings, A Dialogue with Cancer.

Diane was on the writing staff of the popular ABC-TV Show, General Hospital and co-authored a chapter for the best-selling book, Everyone’s Guide to Cancer Therapy. Her newspaper and magazine articles have appeared in: The Los Angeles Times, USA Today, The San Diego Union Tribune, The Ann Arbor News, The Jewish Journal, Writers’ Digest Magazine, The Burbank Leader and Star Magazine.

Diane ran a department at Rogers and Cowan and then independently as she was “on call” when the agency had challenging clients that needed senior counsel. She now has her own company and works with many clients.

Through the years Diane has represented many household names and brands, worked red carpet events and handled A-List celebrities on behalf of her corporate clients.

A UCLA graduate, Ms. Smith has given talks on a variety of topics and has been interviewed by The Today Show, The Los Angeles Times, The New York Times, National Public Radio, The Hollywood Reporter, and more than 40 other media outlets.

Pamela Duchene, PhD, APRN-BC, NEA, FACHE, RAC-MT is Vice President of Education & Training for Harmony Healthcare International (HHI), a nationally recognized, premier Healthcare Consulting firm specializing in C.A.R.E. (Compliance, Audits, Analysis, Reimbursement, Regulatory, Rehabilitation, Education and Efficiency).  Pam has over 25 years of healthcare leadership experience within the acute care and post-acute continuum of care, including 20 years in the Chief Nursing Officer role within acute care systems.  Pam continues clinical practice as a geriatric nurse practitioner.  She has published and presented nationally on nursing leadership, recruitment, shared governance, pain and rehabilitation.  She received a PhD in nursing from Rush University (Chicago), and a post-graduate degree as a nurse practitioner from the University of Massachusetts/Boston.

Joyce Sadewicz, PT, RAC-CT, is VP of HarmonyHelp and a HealthCARE Specialist for Harmony Healthcare International (HHI), a nationally recognized, premier Healthcare Consulting firm specializing in C.A.R.E. (Compliance, Audits, Analysis, Reimbursement, Regulatory, Education and Efficiency). Joyce manages the HarmonyHelp online resource and call center.  HarmonyHelp provides an invaluable resource for the entire interdisciplinary team, questions are answered by a Harmony HealthCARE Specialist within minutes of the inquiry.  The newest regulations and upcoming reimbursement changes are distilled and synthesized on this client-only site for staff to reference and search expeditiously.   Joyce worked previously as the VP of Field Operations, managing a diversified team of HealthCARE Specialists with extensive knowledge in the areas of MDS 3.0, RUG-IV, Compliance, Documentation, Therapy Program development and state-specific Medicaid Case mix, as well as expertise in Medicare and Medicaid Reimbursement and Documentation.  Joyce holds a Bachelor of Science in Physical Therapy from Russell Sage College and Albany Medical School, and has over 30 years experience practicing and providing healthcare specialty services related to therapy services and Medicare regulations and guidelines with extensive knowledge in reimbursement and management of patient care.  Joyce provides in-depth training for MDS Coordinators, Nursing Directors, Administrators, Therapy Directors and all SNF staff on MDS coding, RUG-IV Intimacy, Skilled Nursing and Therapy Documentation and Compliance for the SNF. 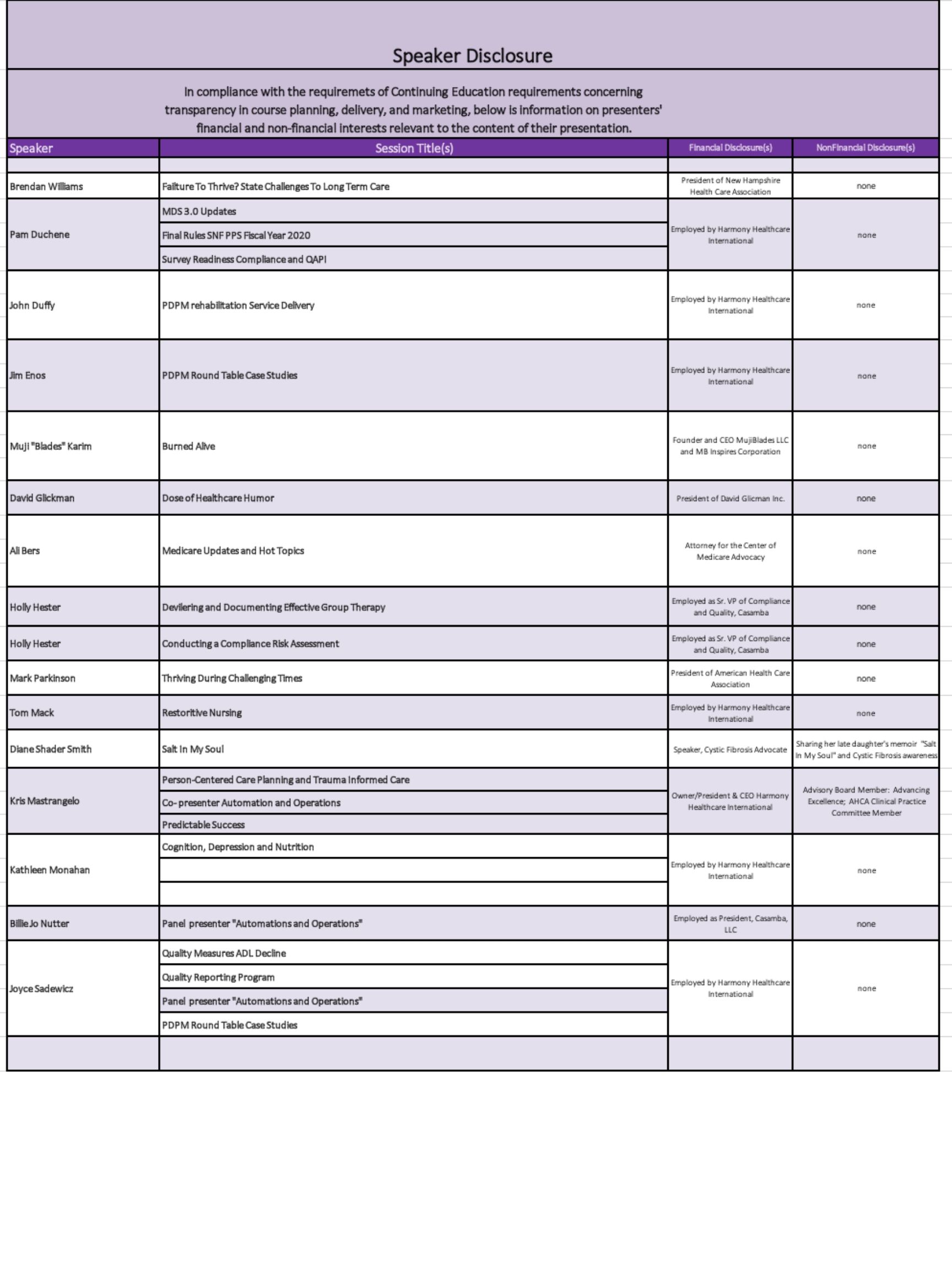