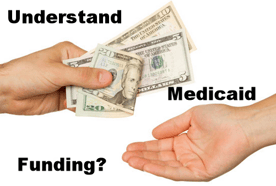 Intergovernmental transfers (IGTs) are a transfer of funds from another government entity (e.g., county, city or another state agency) to the state Medicaid agency. The ability of a state to use IGTs to fund their Medicaid program is recognized in statute (§1903(w)(6) of the Social Security Act) and rule (42 CFR §433.51).  Medicaid has been a joint financing partnership between the states and the federal government since 1965. This provides a guarantee of federal matching funds for state expenditures for health and long-term care services for the country’s low-income population.

The federal government has historically paid between 57-67% of all costs incurred by states in purchasing covered services on behalf of Medicaid beneficiaries. The state share must consist of matching funds and no more than 60% may be from local funds.  States may use state general revenue, local contributions (i.e. intergovernmental transfers and certified public expenditures) and provider taxes.  Rates vary by state, with a system designed to accommodate for states that have lower per capita incomes receiving higher federal matching rates.  States have also creatively generated additional federal Medicaid revenues through alternate financial arrangements involving IGTs.

All payments (both rates and supplemental payments paid outside of rates) to providers must meet federal Upper Payment Limit (UPL) requirements.  UPLs are the maximum aggregate amount of  Medicaid payments that a state may make to a class of institutional providers, including hospitals (inpatient and outpatient services are separated), nursing centers, etc.   Separate UPLs apply to 3 ownership categories– state government, non-state government, and private– for each of these provider types.  Payment methodology must be included in the Medicaid state plan and states must submit annual UPL demonstrations to CMS, which includes provider specific reporting on all payments made to the providers, including supplemental payments.

While IGTs are legal, they may become problematic when they are used in conjunction with UPL supplemental payments.  Recognized as a legitimate funding source, concerns exist about misuse of IGTs to inappropriately increase federal funding to the states.  Based on a GAO report, states’ use of IGTs and UPLs is now on CMS’ radar screen.  CMS has been expected in recent years to increase oversight on how states finance their Medicaid programs through a more focused review of state plan amendments as well as employment of federal auditors.  States felt the impact of this scrutiny which resulted in increased confusion when it comes to the rules of IGTs.  The challenge faced by states was to avoid misappropriation of Medicaid financing.

Multiple states have participated in IGT over the years, although maybe less than you might think given the financial advantage this program can offer the state. A list from as recent as 2013 includes the following states who have participated in various capacities, Indiana, Utah, Montana, Massachusetts, Georgia, Texas, Wisconsin, Pennsylvania, California, Kansas and New York.  Considering the risks of this program, the trick is obtaining a balance to ensure legitimacy of Medicaid financing . Massachusetts, is one such state that experienced approval conditions including phasing out some of the IGTs.

The use of IGT in Texas is explained in synopsis below: The 1115 Medicaid waiver provides for supplemental funding to certain Medicaid providers in Texas in the form of two new pools: the Uncompensated Care (UC) Pool and the Delivery System Reform Incentive Payment (DSRIP) Pool. In order to receive that supplemental funding, some governmental entity must provide funding to HHSC which will then have those funds “matched” by the federal government and sent to the Medicaid provider designated by the funding governmental entity. The process by which funds are transferred to HHSC for the purpose of a federal match is called an “intergovernmental transfer” or “IGT. In general, an intergovernmental transfer (IGT) provider or other hospital should participate in only one Regional Healthcare Partnership even though some hospitals will be in areas near more than one partnership.

In summary, it is important to understand how these programs are structured, applicable federal requirements and considerations and risks in using these programs.  The challenge is to craft a policy that finds the balance between maintaining states’ ability to use IGTs as a legitimate source of Medicaid financing but also assuring that IGTs are not used as a vehicle to support inappropriate Medicaid financing.  There are very specific requirements as to whether a program meets Federal requirements and different programs will undoubtedly have varying implications across states.

For more information on Intergovernmental transfers, please contact Harmony Healthcare by clicking here or calling our office at (800) 530-4413.