SNFs Guide to Understanding Admission Dates on the MDS 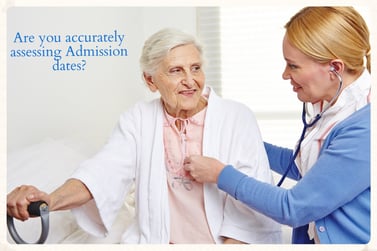 Section A of the MDS 3.0 Assessment provides the assessor with the opportunity to record information about the start date of the current SNF stay and the current episode of a stay.  If these dates do not agree in a logic check performed by the software there will be an error message and the assessment will not be able to be closed until the logic conflict has been resolved.  This is often termed a "warning message", and it is in place to assist providers to correct logic conflicts prior to submitting assessments to the QIES ASAP in order to decrease the number of rejected assessments during submission.

To accurately code Section A it is necessary to understand some of the concepts and definitions associated with MDS assessments.  The September/October 2014 release of the RAI User's Manual left providers with several questions about these concepts and definitions.  The subsequent February 2015 revision offered some clarification for these important sections.  Skilled nursing facilities should be aware of the following information regarding key sections in Section A that may be found in conflict during this logic check.

First, the facility must determine if the current stay meets the definition of an Admission.  Per the RAI User's Manual page 2-7, an Admission is defined as the following:

Completion of an OBRA Admission assessment must occur in any of the following admission situations:

The definition for Reentry was amended to eliminate the instruction that an OBRA admission assessment had to have been completed during the prior stay, as stated in the RAI User's Manual page 2-13:

Reentry refers to the situation when all three of the following occurred prior to this entry: the resident was previously in this facility and was discharged return anticipated and returned within 30 days of discharge.

Coding in Sections A1600, A1700, and A1900 are closely linked.  Software logic checks between these items may result in a warning message that will prompt the provider to correct the logic error before the assessment will "lock" and be available for submission.  As stated previously, this safety check is in place to decrease the number of assessments that would be sent to QIES ASAP and subsequently rejected.  Harmony (HHI) offers the following definitions of each of these critical sections:

Consider the following scenario for clarification of the interrelated coding between A1600, A1700, and A1900:  Upon first Admission to the facility, the facility will complete an entry tracking record and the dates entered into Items A1600 and A1900 will match.  The facility should code A1700 as 1, Admission.  This coding will remain constant for all subsequent assessments within the first stay in that episode.  If the resident is discharged return anticipated and reenters the facility within 30 days, a new stay will begin.  However, the current episode will continue.  Upon readmission from the brief discharge return anticipated of 30 days or less, the facility would complete another entry tracking record and the date in A1600 would change to the new reentry date.  Item A1700 would be coded as a 2, Reentry.  Item A1900 would continue to show the original admission date, which is also the date that the first day of this episode of care began.

SNFs should also review pages A-25 and A-26 of the RAI User's Manual, which offer several scenarios with clarification.

Harmony Healthcare International is available to answer further questions about Admission Dates and Assessments.  To contact us, please visit our website at harmony-healthcare.com or call us at (978) 887-8919.